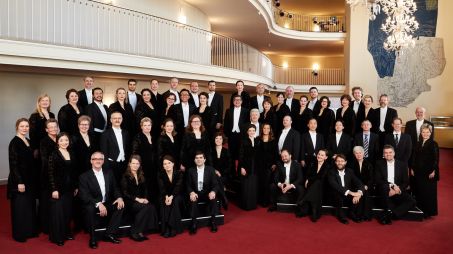 The emotional powerhouse of opera can rarely get into gear without a rousing chorus. What luck that the Deutschen Oper am Rhein chorus is at home on both stages in Düsseldorf and Duisburg. Created at the same time as the theatrical collaboration between Düsseldorf and Duisburg, since it was re-founded 1956 it has proven itself night after night with its balanced vocal strength and exuberant performance style enhancing operatic storytelling across a broad range of musical styles, genres and languages. The chorus has earned a reputation for excellence under the enthusiastic leadership of its Choral Directors Hans Frank (1957–1967), Rudolf Staude (1967–1996), Volkmar Olbrich (1996–1999) and, since 2000, Gerhard Michalski with his deputy Patrick Francis Chestnut. Whether with Schönberg’s ‘Moses und Aron’, the choral operas of Benjamin Britten, Wagner’s ‘Lohengrin’, the British baroque of Georg Friedrich Händel or successful operetta productions, in recent seasons the chorus has also displayed its vocal power and infectious enthusiasm. It also has numerous co-operations with the Ballett am Rhein to its credit, such as Brahms’ ‘Ein Deutsches Requiem’, Stravinsky’s ‘Symphony of Psalms’ and Rossini’s ‘Petite Messe solennelle’. We congratulate the chorus and offer our sincere best wishes on its 65th birthday!